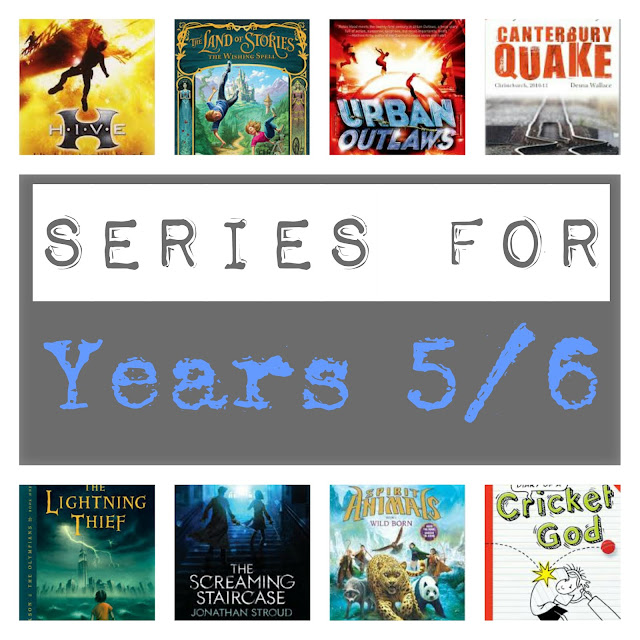 Here is a list of books that I am often recommending to Year 5/6 readers. Included are some that are good for read-a-louds (they will be *).

Anything by Rick Riordan; Percy Jackson series, The Heroes of Olympus series, The Kane Chronicles, and the first of the Magnus Chase series - Sword of Summer. These are best for confident readers especially the latter series as they are chunksters with over 300 pages. All of these are based around gods and myths. Percy and the Olympus ones are Greek gods, Kane chronicles Egyptian gods and the Magnus Chase series is Norse gods.


A new series is Urban Outlaws* by Peter Black. So far there are three; Urban Outlaws, Lockdown and Blackout. These stories are about a group of kids who have special 'talents', be it; computer hacking, sneaking into anywhere, planning and strategising, or gadget making. They work together like a modern day Robin Hoods as they steal from the rich and corrupt and give to the poor.


The Spirit Animals series, by various authors; published by Scholastic. This is a series of 7 books with an offshoot series underway called Last of the Guardians. The series is all about saving the world from an evil force and who is going to do that? A group of 5 children who each have a Spirit Animal who they can communicate with. I love the fact that a variety of races/cultures is represented by the children and that it is a team effort to right the wrongs.


The Land of Stories by Chris Colfer. The Land of Stories tells the tale of twins Alex and Conner. Through the mysterious powers of a cherished book of stories, they leave their world behind and find themselves in a foreign land full of wonder and magic where they come face-to-face with the fairy tale characters they grew up reading about. But after a series of encounters with witches, wolves, goblins, and trolls alike, getting back home is going to be harder than they thought.


The Chronicles of Narnia* by C.S.Lewis. A classic fantasy series that should not be overlooked for the timeless appeal of escapism and being a hero that happens when you are magically transported to another time and place of fantastical proportions. The 7 books making up the series include the Lion the Witch and the Wardrobe* as the most well known, The four Pevensie children need to overcome their personal issues and work together to fulfil the prophecy that the inhabitants of Narnia believe means they are the ones to remove the permanent winter created by the White Witch.


The Harry Potter* series by J.K.Rowling another epic fantasy where good is battling evil. This series is about a boy with a lot to live up to and how he with a lot of help from his friends does what he can to stand up for good against the evil Voldemort.


There are two series by Jonathon Stroud that are highly recommended. The Bartimaeus series, consisting of; The Amulet of Samarkand, The Golem's Eye and Ptolemy's Gate. And Lockwood & Co. which has The Screaming Staircase, The Whispering Skull and The Hollow Boy so far with The Creeping Shadow due out in September 2016.


For a bit of fun try the Shamini Flint series - Diary of a ...... All of the books are about Marcus and how his Dad wants him to be great at sports (which he's not!) so each book is about Marcus's exploits in the new sport his Dad has chosen for him to try. So far there is taekwondo, swimming, rugby, cricket, tennis, track and field, basketball and more.


H.I.V.E. (Higher Institute of Villainous Education) by Mark Walden is all about where bad guys and master criminals learn their trade from the viewpoint of Otto Malpense a 13 yr old master criminal himself. The books in the series are; Higher Institute of Villainous Education, Rogue, Dreadnought, Escape Velocity, Overlord Protocol, Zero Hour, Aftershock, and Deadlock


For those who like history including war stories the My Story series published by scholastic with various authors is a way to learn about a variety of historical situations with quite a few specific to New Zealand. They range from Cleopatra, Marie Antoinette, to The Springbok Rugby protest, to the Canterbury Earthquake, to the trenches in World War I, and D-Day in World War II and also include the Suffragette movement.
Posted by sparklibrarian at 14:48 No comments:

Are you seeing me?, Darren Groth

This novel is written from two viewpoints, a brother and sister. They are taking a trip of epic proportions as the brother is about to move out. This may seem like no big deal but he has Aspergers, Aspergers is a disorder where the brain works differently with the main differences being to do with social interactions - understanding other people's emotion,s reading body language etc., not coping with change and having obsessions.
Their father has recently died and there is no mother - she left when he was a small child. This is an emotional ride as they take this trip together and as we learn the differing viewpoints of each about how they view each other, their parents and what they want out of their lives. I loved it.

Posted by sparklibrarian at 20:57 No comments: